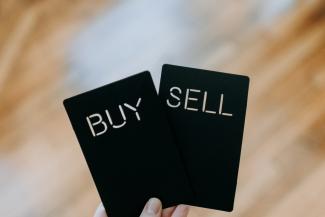 Thoughts on the Nature of Markets and Recent Bond Market Volatility

SWA’s approach has always been to help each client pick an appropriate investment strategy and then stay with it through thick and thin. We don’t believe that acting on predictions is a reliable long-term strategy. We believe that a disciplined owner of a diversified mix of stocks and bonds can achieve long-term growth without resorting to market timing attempts that could leave you worse off.  While there is always some new worry trying to shake us out of our investments, or some new story trying to convince us that everything has changed, we don’t believe that long-term focus should change. Below we share a few anecdotes to make the point that, while changing investment strategies based on predictions or current news may seem attractive, outsmarting the market is more difficult than many assume.

Let’s look back to when COVID-19 first hit. If you quickly and accurately predicted some of the impacts this would have, you certainly could have made some excess profits in the stock market. But the following table of the performance of selected stocks that “should” have benefitted might be surprising.

Each of these stocks surged in 2020, in some cases by hundreds of percent, but each of them topped out and gave back most or all of the gains and ended up underperforming the broad stock market’s gains (as shown by the S&P 500). There are a lot of factors influencing market prices and sometimes even “obvious” things don’t work out the way you would think.

There is another intriguing example of how difficult it is to predict market prices, and how it is often a mistake to underestimate what the market has already priced in. Oil prices, as shown below, had already moved higher in the first two months of this year then surged as sanctions were applied to Russia, but most of that last spike in prices has reversed and now oil prices are only modestly higher than they were before Russian invaded Ukraine. So what’s going on here?

Remember that markets anticipate future events as best they can, so one possible conclusion is that the market had a reasonably accurate estimate on how a Russian invasion would impact oil prices, even before the invasion began. Consider that Russia began massing troops on the Ukrainian border a year ago. An early guess was that it was a training exercise, but as time went on and the troop count increased, this became less likely. So while most people would not even have been aware of this news as it escalated over months, oil market participants surely took note. It’s not hard to imagine they were regularly increasing their probability estimates of an invasion over the past year, causing incremental increases to oil prices. There are, of course, many other factors involved in pricing a barrel of oil, so there’s no way to strip out this one element, but the evidence implies that oil traders had actually forecast these events with a relatively high degree of skill. 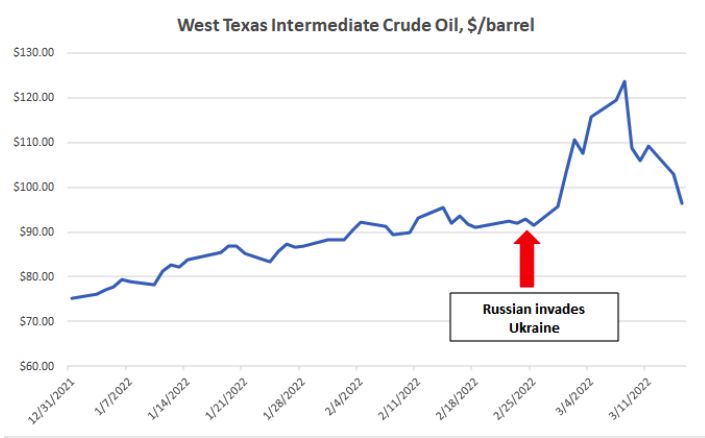 One of the points of these anecdotes is that what may be news to you or I may not be news to the financial markets. Major players in the markets are putting substantial amounts of money on the line, so they have strong incentives to gather as much information as they can that is relevant to their investments. This doesn’t imply that market prices are always “right,” just that there is a very high hurdle to overcome if one’s goal is to outsmart the markets.

This brings us to a topic directly relevant to client portfolios, which is the high volatility in the bond market in recent months. Last year as much of the global economy reopened following waves of COVID-19 shutdowns, we advised clients that we were likely to experience above-average levels of inflation in the short term. We didn’t make any specific predictions about what the Consumer Price Index (CPI) percentage change would be, but if we had, it would have been too low as we did not anticipate the degree of supply chain disruptions that occurred in many sectors of the economy.

The Federal Reserve, which controls short-term interest rates in the U.S., was also caught by surprise, along with most market participants. For much of 2021, expectations were that the Fed would not raise interest rates until perhaps 2023 or even 2024, as it waited for the economy to return to a more “normal” situation. But the labor force tightened (although with a notably lower labor force size than at the start of 2020) and inflation rates increased, shifting market sentiment toward the Fed needing to increase rates. The March 16 rate hike of 0.25% is the first in what is expected to be a series of rate hikes throughout the remainder of 2022 and into 2023.

The bond market has responded by raising yields across the maturity spectrum in anticipation of these rate hikes. As yields go up, bond prices go down, resulting in an unusually weak performance for bond portfolios so far in 2022. The main benchmark for U.S. bond portfolios is the Bloomberg Barclays U.S. Aggregate Bond Index, which has declined 5.7% year-to-date through March 15.

We have had some clients ask in prior months if it might be better to sell bonds and sit in cash due to the risk that rates might rise and our response has been, and still is, that we don’t believe in market timing. To be clear, this doesn’t mean that we didn’t think it was possible for rates to rise; it is just our view that trying to outguess the markets is not a productive long-term approach.

Of course, there were people who had predicted that rates would rise, which might make you think it was obvious and therefore certain to happen. But this line of thinking is more precarious than you might assume. Here are a few things to consider.

Our point is not that we can never correctly predict a move in the markets; it’s just that we are unlikely to be able to do so with any consistency over time. Given that conclusion, we should avoid the temptation to time markets. With hindsight, sometimes you might wish you had; at other times, you’ll be relieved you didn’t. Over a long time horizon, though, your good hunches are likely to be cancelled out by your bad hunches and more often than not, in our experience, end up with lower returns for the effort.

Note: Past performance is not and indicator of future returns. None of the investments mentioned in this article should be taken as recommendations to buy or sell.